As thanks for the generous donations on Patreon this past month, I wanted to express my gratitude with another Faberge Egg story.

Oh, and until June 2020, all Patreon episodes are free. Check them out at Patreon.com/Relic

Firstly, thank you to all who donated to the Relic Patreon over the course of the last month. It was a huge help during this period of uncertainty! I will be releasing a bonus episode this upcoming week that will include a shout-out.

The Faberge Eggs are pinnacles of luxury. Jewel encrusted and carved from precious metals, the Eggs were the treasures of the last Romanov Tsars…until 300 years of monarchical rule was toppled by the Russian Revolution. Though most of the Eggs were sold and auctioned off over the years, six remain missing. However, lost eggs have resurfaced before, and in unlikely places…

Mammoth facts, and creepy places made out of Mammoth Bones.

An unearthed trading port with an interesting commodity (and irritating infrastructure)

Weird swords in ancient monasteries, and the secrets they hold.

And the oldest substance in the solar system discovered in the middle of nowhere.

The “cursed jewel” is a pop cultural trope with a very complicated history–the The Hope Diamond being the most famous example. Some of these dark gems have also gone missing. Was the Florentine Diamond’s disappearance due to bad luck and greed, or did it, The Hope, and Black Orlov curse their owners into misfortune and despair?

Music by by Kevin MacLeod (https://incompetech.com)
License: CC BY (http://creativecommons.org/licenses/by/4.0/)

When the first manned mission to the moon camp back to Earth, they brought back samples of the lunar geology. President Richard Nixon ordered a few of these samples to be segmented, encased in lucite, and gifted to the nations of the world. Through a series of strange circumstances involving assassination, government collapse, and a heist at NASA, many of the moon rocks are now missing. 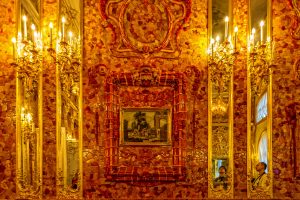 The Amber Room was considered the eighth wonder of the world, and a symbol of peace between two of Europe’s most powerful nations. A priceless chamber of wall-to-wall amber mosaics, furniture, and ornaments, it adorned a Russian palace for 300 years until it was stolen by the Nazis. Is it still out there, waiting to be uncovered?

Music from Musopen and Incompetech. Attributions are as follows: